Madhubani paintings, (also referred to as Mithila Art as it flourishes in the Mithila region of Bihar), are characterized by line drawings based on mythological themes, in bright colours and decorative borders. They are so called because they originated in and around a large agricultural town in Bihar, Madhubani or 'Forest of Honey'.
Originally, Madhubani Paintings were executed on freshly plastered mud walls, on religious occasions or weddings. Each painting was a prayer and an accompaniment to meditation. Well executed paintings were believed to be inhabited by the deities depicted in them. The colors used in these paintings were made from Natural Dyes. Today, Madhubani Paintings are made on silk, Handmade paper, cloth, canvas etc for commercial purposes. The use of chemical dyes and paints have resulted in brighter multicolored paintings. 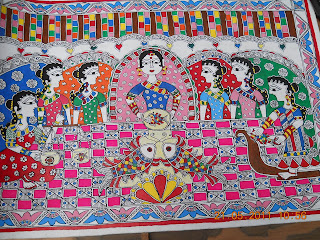 Madhubani art came to the notice of the rest of the country in the 1960s. Bihar had been hit by a terrible drought and the government decided to promote Madhubani Paintings to create an alternative non agricultural source of earning. The All-India Handicrafts Board encouraged the artists
Madhubani paintings are mostly made by Hindu village women who traditionally passed on this skill from mother to daughter.

There is a caste hierarchy involved in the making of Madhubani paintings. The Brahmins, people of the highest caste, depict images of Gods and Goddesses and use all kinds of bright colours such as red, yellow, blue and lemon. The second in the hierarchy are the Kayasthas, who paint religious themes and motifs, but use only red and black colors. The lowest caste, the Dusadhs, paint religious themes but use more of the Gondhna or Tattoo art and usually depicts flora and fauna in repetitive motifs.

Even today, most of the Madhubani artists' work remains anonymous. Few women like to mark their paintings with their names, and are quite reluctant to consider themselves individual producers of "works of art".
Posted by Unknown at 06:00 1 comment:

Some recent paintings made at our Production wing,
Made on Hand made paper poster color used
this painting can be made on cloths also with fabric color in
diffrent size,

These paintings are for sale,
Try. Thanks.

itsrkdas@gmail.com
Posted by Unknown at 03:01 No comments:

The central theme the Madhubani paintings is the Hindu Gods and Goddesses. The main theme is supported by the traditional geometric patterns. Some of the main attributes of all the Madhubani paintings double line border, ornate floral patterns, abstract-like figures of deities, bold use of colors and bulging eyes and a jolting nose of the faces of the figures. Madhubani paintings requires paste of cow dung and mud, applied to the walls and floors to give a perfect black background on which pictures are drawn with rice paste and vegetable colors. As the ethnic art is gaining its due popularity these days, this art form is being done on a variety of interesting bases like canvas, drapes, handmade paper, wall hangings, glass, sarees etc. For an authentic look many of the painters still apply a thin layer of cow dung and mud paste on their canvases.

Madhubani paintings were traditionally done by females only. Since generations, this folk art form has been passing from mothers to daughters in Mithila. Though, the madhubani painting technique has now crossed the restricted confinements of Mithila and Bihar and thus, skilled madhubani artists (including males) can be found in other parts of the country as well.

Hindu women who live in villages near the market town of Madhubani in northern India maintain old traditions and teach them to their daughters. Painting is one of the traditional skills that is passed down from generation to generation in the families of some of the women. They paint figures from nature and myth on household and village walls to mark the seasonal festivals of the religious year, for special events of the life-cycle, and when marriages are being arranged they prepare intricately designed wedding proposals.
But even though women in the villages around Madhubani have been practicing their folk art for centuries, the world at large has come to know about these women and to consider them to be "artists" only in the last thirty years. Even now, most of their work remains anonymous. The women, some of them illiterate, are in any case reluctant to consider themselves individual producers of "works of art" and only a few of them mark the paintings with their own name.

Among the first modern outsiders to document the tradition of Madhubani painting were William and Mildred Archer. He was a British civil servant assigned to the district during the colonial era. The Archers obtained some drawings on paper that the women painters were using as aids to memory. Works that the Archers collected went to the India Records Office in London (now part of the British Library) where a small number of specialists could study them as creative instances of India's folk art.

What led the women painters to share their work with the larger world was a major ecological and economic crisis that resulted from a prolonged drought in 1966-68 that struck Madhubani and the surrounding region of Mithila. In order to create a new source of non-agricultural income, the All-India Handicrafts Board encouraged the women artists to produce their traditional paintings on handmade paper for commercial sale.

Since then, painting has become a primary source of income for scores of families. Production and initial marketing have been regulated by regional craft guilds, the state government of Bihar, and the Government of India. But the continuing market in this art throughout the world is a tribute to the resourcefulness of the women of Mithila who have successfully transferred their techniques of bhitti chitra or wall-painting to the medium of paper, and have resisted the temptation to adapt their traditional designs too freely in pursuit of unpredictable public tastes. 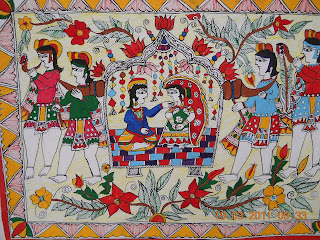 Poster from MithilaPainting centre.
Source:www.vl-site.org/india/mithila/intro.html
Posted by Unknown at 11:02 No comments: